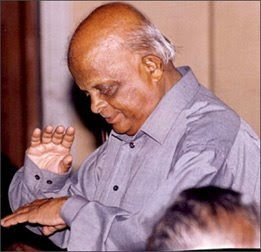 Premasiri Khemadasa was not only Sri Lanka’s best known composer but also the founder of the greater tradition of Sri Lankan music. His creativity penetrated almost every aspect of modern music from academic compositions to popular film music.

Although his influence should be immense there is none to absorb it due to lack of talent and philosophy of music among the new-comers. This is the poverty of the musical scene in Sri Lanka.

His latest opera, Agni has already changed the direction of the musical creations and offer a big challenge to the popular concept of music. In a country where the popular mode is the simple song, his music has to change the audience’s relationship to the musical experience.

In the Agni opera you can listen to one-and-half hour musical performance giving the impression of a gigantic epic theatre because of its huge sonic canvas. Each new melody, harmony and rhythmic change is monumental and there is nothing to compare with it in the contemporary musical scene.

It bravely generates superb voices of Indika Upamali, Krishan Wickramasinghe, Subuddhi Lakmali, Sumudu Pathiraja, Wagesha and Thisari who could easily dismiss the entire catalogue of popular singers along with their musical scribblings.

Khemadasa was no doubt Sri Lanka’s foremost composer of classical music who had an intellectual monopoly on this field.

It is very interesting to note that the birthday of Premasiri Khemadasa and Phillip Glass, the American composer who wrote Einstein on the Beach, Mishima, Satyagraha, Glassworks etc., fall on the last week of January.

There are many pieces that can be considered as dramatic symphonies with narrative elements and revolutionary additions of notes as an elaboration and sponge-like absorption of the folk colours thought to exist between the sound and rhythm and beyond the reach of the existing codes.

It enhances the spectrum of the code as the Impressionist and Post-impressionist painters such as Degas, Renoir, Monet, Gauguin etc. opened up a vast range of new colourism unimaginable to academic painters.

His music has a significant cross fertilisation with oriental music. He was one of the few musicians in the world who could work in both genres. In this particular sense of argument, he always voiced against the splitting of the audience into Oriental and Western, Traditional and Avant-garde, Bourgeois and Proletariat etc.

The performing of Agni not only in Colombo but also in Negombo, Chilaw, Panadura and Anuradhapura with full-houses has blurred the borders of that distinction and discrimination. The maestro was fortunate enough to find a welcome audience for every performance sometimes even amidst adverse security situations and parking arrangements.

His creations presented a radical basis for music and change the fundamentals of aesthetics of music and also its pedagogy. He fully embraced the use of folk music, sometimes its rare and esoteric categories such as Punam Gee to give a greater rhythmic and harmonic variety. He had a Levi-Straussian fascination for the repositories of the folk life available in their work-songs.

From the very beginning of his musical career, he endeavoured to create a tonality totally different from the traditional signing. In Sri Lankan music, the modernism should be the name appropriate to his trend of thought and philosophy in music.

There only we can experience how the refrain or ritornelle works effectively fascinating the heart of the native within the context of a larger creation and complex musical procedures. Modern music-blenders, fusion-experts and sales-rep singers would never reach this apex of musical creation.

They all want to replace the Muse with the computer and its fusion software.

According to Jonathan Harvey, Muse the Greek counterpart of Goddess Saraswathee is the crucial symbolic feminine figure in the composer’s life.

As the etymology of the words suggested, Harvey says, the idea of the Muse has always been central to music.

The word Music is derived from the Greek meaning of the Muses, suggesting that it was the art form most associated with the particular inspiration that only a Muse could bring.

I am sure that the Muse of Khemadasa dwells in his simple refrains or ritornelle. Gilles Deleuze and Felix Guattari, two Post-modern French philosophers who wrote on the philosophy of music in their landmark philosophical project, A Thousand Plateaus; Capitalism and Schizophrenia, admit that the Refrain or its Italian counterpart category, which means ‘the little return’, i.e. recurring part of a musical creation usually appearing again and again, creates the core and spirit of music.

When we evaluate the contribution made by Khemadasa for the musical world, we can easily witness that he has been able to fill a serious gap hitherto prevailed not only in the Oriental music but also in the Western classical tradition. Blissful moments of his music brighten the darkness and chasm created by that lack up there as the hegemony of the Western music and the complacence of the Oriental tradition. Even Western music, although it is a great musical language, still needs to acquire something from Non- western cultures.

Here we should appreciate the fact that the Western music has accommodated and absorbed many elements and moods from African and Latin American music in terms of codes, tempo and tonality. In fact, accommodating the sonic qualities of other cultures is a moral responsibility of the art of music.

Pierre Boulez argued that he was struck in a violent way by the beauty of the Far Eastern and African works.

He said that although this beauty was so far removed by his culture it was so close to his temperament.

Khemadasa was no doubt one of the pioneers who endeavoured to include the Oriental musical sensibility and its own elements in the Western tradition.

He has been successful in accommodating code additions, new rhythms and new sentiments hitherto unknown to the West, in his creations.

For him music was a way of life, a way of being in the world and become an integral part of the modernity and the post-modernity.

He has been brave enough in sustaining new codes or extending the existing codes. He was a winner at a particular point where the disciples of Western music fail.

Let me quote a very good example from the modern history of painting to prove my argument on the success and failure of the Western masters. John Berger, a famous American Marxist critic describes how Pablo Picasso failed in the later part of his artistic life due to the limitations of the European art world.

“Picasso should have left Europe, to which he has never properly belonged, in which he has always remained a vertical invader ….. He might have visited India, Indonesia, China, Mexico or West Africa. ….., I am suggesting that outside Europe he would have found his work”.

Khemadasa’s contribution should necessarily be understood in this paradigm, which is about to be shifted.

The complex cross-breeding of his musical heritage, the intense political basis of his art and very nature of his genius should be duly respected as he has been imaginative enough to become an artist of an emerging musical world.

Reminiscence of his real-life sonata by Sunanda Mahendra (Daily News)

May his music live on! (Daily News)

A man on fire by Madhubhashini Ratnayake (Sunday Times)


*
Previously on this blog